For international lawyers, it is the collision that was heard around the world. In 1926, two vessels collided in the Mediterranean and the international legal community was never the same. It is my favorite case for its simplicity and substance, and I am glad that there is a resurgent interest in the case after a long, long exile. But the purpose of this series, and of this first installment on the Lotus case, is just to give you some of the facts of the case, some context, and some light on its controversial decision.

The S.S. Lotus was a 1898 steamship, formerly called the ’Tonkin’, in the service of the ‘Compagnie des ‘Messageries Maritimes’, hauling mail between France and the Middle East. On August 2nd, 1926, the Lotus collided with the Turkish vessel ’Boz-Kourt’ 5 nautical miles north of the Greek Island of Lesbos.  According to reports, it was the Boz Kourt that swerved mid-course across the bow of the Lotus, causing it to be cut in half, after which it sunk. Eight crew members of the Boz Kourt died. After picking up the surviving crew members, including Captain Hassan Bey, the Lotus continued its voyage to Constantinople (current Istanbul). Already the day after the collision, the Turkish authorities opened an investigation. In Constantinople, the Master of the Lotus filed his incident report. But it was First Officer Lieutenant Desmons who was at the helm of the Lotus, and who was therefore asked to give evidence before the Turkish authorities. A lengthy examination resulted in the arrest and detention of both Desmons and Bey awaiting a criminal trial. Although Bey was considered primary responsible, Desmons  was accused of not doing enough to avoid the collision. The arrest of Desmons caused a furor in France. Where did Turkey get the legal authority and frankly the gall to arrest and detain a French citizen who was on board of a vessel flying the French flag at the time of the collision? Outrage was expressed in French media, and that outrage was heard around the world. But neither public uproar or bilateral diplomacy could solve the issue between France and Turkey. Meanwhile, Desmons was prosecuted, convicted and sentenced to 80 days in jail. in the end, France and Turkey agreed to submit the case to the Permanent Court of International Justice (PCIJ).

The Permanent Court of International Justice had to decide the case in part on the basis of the 1923 Treaty of Lausanne. This treaty is also a symbol of the demise of the Ottoman Empire after World War I, and the birth of the secular Turkish Republic. It set the borders of Turkey and is generally seen as the final acceptance of Turkey as being equal to the Western Powers; a full member of the club of civilized nations. And as with all ’new’ states, gaining (full) sovereignty and being accepted as equal tempts those newbies to assert themselves forcefully. Either to cement that new position among equals and actually be treated as equal, or to defend that new status. In that context, I wonder whether Turkey’s assertion of jurisdiction over Desmons was an expression of the new Republic’s power, modernity, and new found place in the world. At the same time, was France’s outrage an expression of its uneasiness or inexperience with Turkey as a modern and equal state? I will do more research on the Lotus-case in the future and come up with a more sophisticated theory.

This was the first article on a classic case. It is necessarily short and succinct. Let me know in the comments below or through Facebook or Twitter whether you would like to know more about the Lotus-case. How can I improve the approach to Classic Cases? In other words, what should or shouldn’t be in these articles? 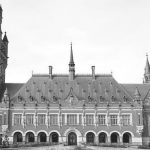