When States make reservations to treaties, confusion ensues. The legal effect of these reservations among the parties to the treaty is complex. After World War II, it was uncertain as to what the effect should be at all. The system of reservations, now codified in the Vienna Convention on the Law of Treaties (VCLT), exists because of the Genocide Convention Advisory Opinion (1951). The Opinion is still a classic case in many classrooms, because it sheds light on the reasoning behind the system and some key concepts of the system, even though asking for an opinion was not without controversy.

Only five years after WWII, States sought to prevent genocide in the future through the Genocide Convention. In no uncertain terms, Article 1 of that treaty says that “[t]he Contracting Parties confirm that genocide, whether committed in time of peace or in time of war, is a crime under international law which they undertake to prevent and to punish.” It also defined the crime of genocide as “acts committed with intent to destroy, in whole or in part, a national, ethnical, racial or religious group”, and goes on to list certain acts. The very term ‘genocide’ had only been coined about eight years before, during the war, by Rafael Lemkin, a Polish scholar who had fled to the United States (read his story in the outstanding book ‘East West Street’ by Philippe Sands).

How to deal with reservations?

If a State makes a reservation to an article in a treaty, it tries to change the legal effect of that article, but still be committed to the treaty as a whole. The question before the International Court of Justice (ICJ) was to what extent such reservations were also allowed with respect to the Genocide Convention. The general issue of reservations had come up first, however, namely, before the Sixth Committee of the UN General Assembly. However, Secretary-General Trygve Lie, pressed the issue because the Genocide Convention was about to enter into force. Several countries like Bulgaria and The Philippines made reservations to the treaty, but other states had objected. The Secretary-General doubted how to handle both the reservations and the objections. To tackle the issue, it was proposed to either ask the ICJ about reservations to the Genocide Convention, or ask the International Law Commission to study reservations to multilateral conventions in general. Of course in the end, the General Assembly decided to include both in one resolution.

The General Assembly asked the ICJ three questions. First, whether a State can be considered a party to the treaty if it has made a reservation when others have objected to it? Second, if so, what is the effect of the reservation between the reserving States and those who object and those who accept? Third, what is the legal effect if the reservering State has not yet ratified or a State can sign or accede but hasn’t done so yet. For the purposes of this classic case summary, only the first two are relevant.

Reservations versus consent, purpose and integrity

Because treaty relations are based on consent, the Court said that it follows that a reservation must be accepted by another State before it can be effective against that State. But it also follows that a reservation cannot be allowed to ‘frustrate or impair’ the purpose of the treaty in question. At the same time, the integrity of a treaty as a whole must be protected. Moreover, when there is no prohibition on reservations in the treaty, reservations are allowed. Reservations to treaties such as the Genocide convention must be approached with a slightly more flexible approach, the Court argued: “The character of a multilateral convention, its purpose, provisions, mode of preparation and adoption, are factors which must be considered in determining, in the absence of any express provision on the subject, the possibility of making reservations, as well as their validity and effect.”

Reservations to the Genocide Convention: object and purpose

So what factors should be taken into account in the case of the Genocide Convention? First, the Court argued that the principles underlying the Convention also exist outside of it, as principles ‘recognized by civilized nations’, and require co-operation. Second, the objects of the Genocide Convention are of common interest, i.e. the prevention and punishing genocide, and States do not  have any of their own interests at stake. Therefore, the Court concluded, that because of the object and purpose of the Genocide Convention the parties intended to have as many States possible participate in the Convention. At the same time, however, there was a limit to the kind of reservations that could be made, as well as to the objections to any reservations. Every reservation and objection has to be evaluated on a case by case basis by every State party for itself. But generally speaking, no State is allowed to make a reservation that is not compatible with the object and purpose of a treaty, a rule that has been codified in Article 19(c) of the VCLT.

But as the Court admitted, that didn’t really answer the first question. The answer to the second question is where this case truly becomes a classic. In essence, the ICJ laid out the possible different relationships between parties to the Genocide Convention in the case of reservations and objections. This system is largely based, and built on that of the Pan American Union for multilateral conventions from 1932. These different options are now codified in Articles 19 to 21 of the VCLT. First, a reserving State and a State not objecting to the reservation enter into a treaty relationship, meaning they can hold each other accountable with respect to the treaty, with the reservation in place. Second, if a State objects to a reservation, it may still want to be in a treaty relationship with the reserving State. In that case, the article that is affected by the reservation is just left out of the treaty in their relationship. That can mean that both this second option and the first option in the end have the same effect, namely taking away the legal effect of an article. Third, a State may consider the reservation so objectionable, incompatible wit the object and purpose of the treaty, that it does not want to be in a relationship with the reserving State. Therefore, they cannot hold each other accountable for violations of the treaty.

So the Court did not in substance decide what and what is not allowed under the Genocide Convention in terms of reservations. It provided a system of legal effects, but it is up to the parties to the treaty in question whether a reservation is acceptable on the substance or not. The criterion of ‘object and purpose’ does not help much on that front. Ironically, a common reservation to the Genocide Convention that was objected to the most was about the jurisdiction of the International Court of Justice, Article IX of the Convention. For instance, when the United States joined the Convention in 1989, it sought to make that jurisdiction of the Court dependent on its consent, rather than compulsory jurisdiction based on the treaty. The Netherlands and other States objected, claiming that it undermined the very object and purpose of the treaty, namely being able to hold each other accountable for the grave crimes described in it. As a result, they did not want to be in a treaty relationship with the United States, although I am not sure whether that in this particular case that helps the object and purpose of the Genocide Convention. 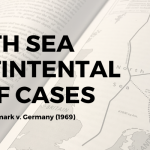