The best known, clearest, most secure aspect of international law is that in which the law is now most often found: treaties. A treaty in international affairs is basically a contract, and the law that governs the contracts is basically contract law. In 1000 words or less, this is how a treaty is made, operates and ends. Be careful, because the law of treaties can be a bit dull. Don’t snooz.

The Law of Treaties

The life of a treaty is itself governed by a treaty, the Vienna Convention on the Law of Treaties (VCLT). It lays down ancient and new principles that spell out how to deal with treaties. But the VCLT is complementary, that is, only if the treaty in question does not specify how to deal with a certain issue, the VCLT kicks in. The meta-principle at the basis of treaties is that of pacta sunt servanda: obligations voluntarily entered, into must be kept. Where this principle comes from we don’t agree on, but it is a common sensical principle nonetheless. Another principle, non-retroactivity, dictates that the provisions of a treaty may not be applied to issues that occurred before the treaty entered into force. And a state cannot rely on its own national law to justify the violation of an obligation laid down in a treaty.

Like any agreement, the process starts with a negotiation and the drafting of a text embodying its aims and obligations. When the draft text is finished, a final act is necessary. Because a state can only be bound by an obligation through its consent, that consent must be clearly expressed. A state’s ’consent to be bound’ can take different forms, but usually consent is given in two stages. First, the actual signing of the treaty. Second, most states require that the national legislative body, its parliament, ratify the treaty. Only when those two stages have been completed has consent been fully established and can it be bound by the treaty. But after signing, yet before ratification, the state is held not to do anything that would defeat the object and purpose of the treaty. The clearest example of that would be committing genocide after signing the Genocide Convention, but before ratifying it. Not cool. A treaty between two states will ’enter into force’, become binding upon ratification by both states. A multilateral treaty will often specify when that happens, often after a certain number of ratifications has been reached.

But interpretation is where the action is. Words can only capture so much. States must determine what a treaty tells them to do or not do on a daily basis. What is it exactly what this or that provision prohibits or compels a state to do? This is where the lawyer gets to shine. The VCLT describes the different methods for interpretation: look at the words in their ordinary or specific meanings, together with the context, and also take into account the object and purpose of the treaty. If necessary, other things can also be looked at, such as the treaty negotiations or state practice since the treaty’s entry into force. In realistic terms, the one doing the interpreting will often have an end-result in mind and use whatever method is convenient. The interpretation should just be plausible, reasonable, logical in order to be acceptable. There will be some who will prefer to rely more on the text, while others will emphasize subsequent developments, and a treaty as a ’living instrument’. So all this makes interpretation an art, and not a science.

Ending or withdrawing from treaties

Not all treaties live forever. The object of a treaty may disappear, it may have a definite run-time or the parties may no longer find it useful. Most often a treaty will have provisions relating to how or when a treaty will end. But outside of a treaty itself, the VCLT provides additional grounds for ending a treaty, or withdrawing from it. A state may unilaterally withdraw from a treaty if its underlying consent to the treaty is somehow compromised. Circumstances that gave rise to a treaty may have fundamentally changed; the other party may have materially breached it; or the very object of the treaty – such as a physical object – has disappeared, making it impossible to perform the obligations in the treaty. ’Void’ or ’voidable’ are legal terms of art about whether true consent was ever properly given. A treaty is void – there was no consent – when a state has been coerced into signing the treaty, or when it conflicts with a so-called ius cogens rule; a norm that is so important that no other rule can go against it, like the prohibitions on genocide and slavery. Consent can also be invalidated when there is, for instance, a case of fraud or corruption. In such cases, the treaty is voidable.

Pfew. We got through it. Any questions? Let me know in the comments below, or through Facebook or Twitter. 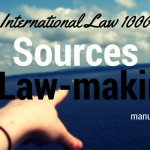 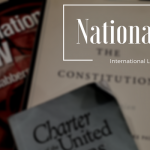